When Will They Shut Down the Internet?

The conspirators who have taken over the world have bought control of the mainstream media and much of the internet.

But they have not taken complete control of the internet.

Despite aggressive behaviour typical of dictatorships everywhere, independent platforms such as Brand New Tube and independently controlled websites such as this one remain outside the control of the cabal now determined to control the world.

The uncontrolled websites and independent platforms are the one remaining threat to the new world order and they are doubtless a serious irritation.

Much to their annoyance the conspirators are finding difficulty in suppressing the independent voices of those sharing the truth.

My own websites each receive between 1,750 and 2,000 deliberate hacking attempts every month. These are serious attempts to take down the websites. It appears that the hacking attempts originate with the US and UK governments. Two of my books on covid-19 have been repeatedly banned. (Both are available as free PDF downloads on this website and those two books have for many months been regularly downloaded around three thousand times a week – each.) As I have described in previous videos, they have done just about everything imaginable to silence me – with governments using lies and libels to try to discredit me. I have recently had email accounts mysteriously stop working. And two new devices suddenly died for no reason. They hadn’t even been jabbed. My videos are often unusually difficult to find – that’s one of the reasons why the transcripts of all my videos are available on this website.

As I revealed in a previous video, Brand New Tube has been subjected to serious attacks. Muhammad Butt was told that if he allowed me to continue making my videos then Brand New Tube would be taken down. With courage and honour he moved the platform abroad to avoid the UK authorities. I know that the always excellent UK Column has had difficulties of its own.

Nevertheless, despite all these threats we are all still here.

And those of us in the vocal resistance movement are doubtless regarded as a major threat by those who are attempting to introduce the thoroughly evil and undemocratic global reset.

It would be remarkably easy to shut down the internet and even easier to close down the parts we use – leaving the big commercial sites to continue operating.

Look at what happened recently when many big sites went down. Even Amazon, PayPal, CNN, many big newspapers and the BBC were silenced. Allegedly, it was all the result of a content delivery network based in San Francisco updating their own configuration settings. They unwittingly triggered a bug in their own software.

That’s how vulnerable the internet is – and how easy it is to shut down specific parts of the whole enterprise.

The cloud – which provides masses of servers for customers everywhere – is supposed to help absorb changes in demand as well as putting users in contact with servers closer to where they are.

Much of the world’s cloud is provided by just a handful of content delivery networks. It wouldn’t be difficult to take down one or two of those –or to threaten to. It wouldn’t be difficult to put pressure on them to exclude platforms or websites which carry what the enemy think of as subversive material. It would be easy to provide priority to the big commercial sites. It would be very easy to explain that independent platforms have to be shut down to protect national security.

It’s pretty obvious that the internet is incredibly vulnerable to the actions of people driven by a yearning for money and power – the very evil people behind the new world order, the great reset and agenda 21.

Ransomware – in which countries and big companies have to pay out huge sums to take back control of their networks – is booming. One of the bosses at GCHQ reckons that criminal hackers pose a bigger threat to UK security than hostile states.

And I’m afraid that there really can’t be any doubt that we are getting very close to the point where the crooks behind Agenda 21, supported by naïve and misinformed global warming campaigners, and greens who either have no real idea what is going on or who welcome the disappearance of freedom and democracy, will decide that the resistance movement needs to be shut down completely.

They’re already desperately annoyed about our exposing the dangers of the experimental vaccine. I’ve noticed that whenever I do a video about the experimental jabs, the analytics change and people find it difficult to view the video.

You think it’s unlikely that anyone would dare ban huge chunks of the internet?

You don’t think they would do that?

Who would have thought they would have dared lock up whole nations and destroy the global economy?

The people behind this fraud have deliberately killed millions of people and if we don’t stop them they will kill billions.

There isn’t anything they wouldn’t do.

So, believe me, if and when they feel it is necessary to close down the whole internet, they‘d do it without hesitation. And so they’ll certainly close down the bits which they consider a nuisance.

We have to be prepared for that eventuality. Imagine the consequences. No Twitter. No Facebook. Some email facilities will go down. No independent platforms. And no independent websites.

If they think it necessary they will close the internet completely. They will find it incredibly easy to close down the parts of the internet which they find irritating.

And so we need to investigate other forms of communication – old-fashioned mail and ordinary telephones. We need to find new ways to keep in touch with one another.

Maybe, as a starting point, you should subscribe to the print edition of The Lightpaper. The details of how to do it are on their website www.thelightpaper.co.uk and please volunteer to help out in any way you can.

Vernon Coleman’s book How to protect and preserve your freedom, identity and privacy is available as a paperback on Amazon.

Share:
Share on TwitterShare on FacebookPrintEmail
Recommended:
Here is the PROOF that covid-19 was downgraded in March 2020
UPDATED: How Many People Are the Vaccines Killing?
UPDATED: Proof That Face Masks Do More Harm Than Good
Covid-19: The Greatest Hoax in History
Covid-19: The Fraud Continues
Covid-19: Exposing the Lies 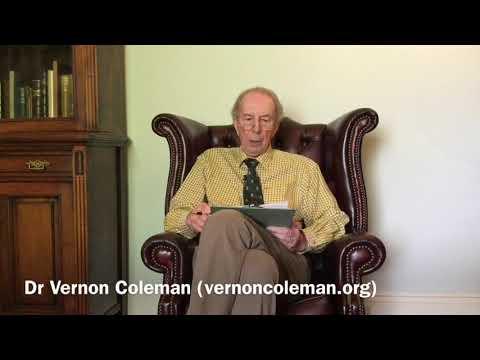