Time is Running Out Fast

The name ‘false flag’ comes from the days when naughty captains of sailing ships used to put up a flag suggesting that they belonged to an opposing navy. The innocent ship captains of the other side, seeing their own flag fluttering aloft, would merrily assume that they could safely approach to exchange cooking recipes and favourite holiday resorts with a fellow captain since social media wasn’t available then.

Then, suddenly, whoosh, a flurry of cannon balls would tear away their mizzen mast (I read the Horatio Hornblower stories when I was young) leaving them vulnerable to a quick and humiliating capture.

Pirates used to favour the same trick. Down would come the Jolly Roger. And up would go the Spanish or British flag.

History is full of false flag operations: the aim is always to mislead, to manipulate and to exercise control through false information of some kind.

Remember the Trojan horse? That was an early false flag. There were false flag operations in ancient Egypt where Ramses was tricked. In Rome the church faked a document which gave itself the right to create the kings of Europe. In the 12th century the church was at it again, this time inventing a character called Prester John who was used to trick the Europeans into entering into a war they had no hope of winning. Prester John was subsequently used for an astonishing five centuries without anyone smelling a rat.

From the 13th century onwards the church blamed innocent people for everything which went wrong – including the weather. And since there was a little ice age for several centuries they had plenty of opportunity to hunt out people, call them witches and kill them. If the crops failed the local witch (usually an unfortunate local midwife or nurse) would be blamed. If it was unduly chilly one winter then the witch would be burnt or drowned. Man-made climate change. If a plague killed a good many people then the deaths were blamed on local witches. Witch hunting was a popular profession and akin, in its day, to the work done by Wikipedia editors today.

The Spanish-American civil war began when President McKinley told the Americans that the US Maine had been sunk in the harbour at Havana by a Spanish mine. The public outrage was enough to start the war. However, the captain of the Maine had insisted that the ship was sunk not by a mine but by an explosion in a coal bin. After the war, investigations showed that the captain was correct and that McKinley had lied. Tut tut. A politician lying. What a shock.

Hitler was a great believer in false flag operations. In 1933, the Reichstag building in Berlin, the home of the German Parliament, was set on fire. Hitler blamed communist agitators and used the fire to establish himself and his party in control of Germany. In 1939, Hitler arranged for German targets to be attacked and then told the Germans that Poland was responsible. And thus began the Second World War.

It is very widely believed that the attacks on American targets on September 11th 2001 were arranged (or at very least known about) by the Americans. And both the Americans and the British lied about `weapons of mass destruction’ in Iraq as an excuse for invading that country. Politicians who supported or defended those lies were guilty of war crimes. The weapons of mass destruction scam was a massive false flag operation designed to ramp up the fear of terrorism and enable those in power to introduce massively intrusive weapons of control – such as Homeland Security in the United States of America.

At the turn of the century the big hoax was Y2K – when the world was told that computers would stop functioning properly at midnight on December 31st 1999. The claim was that computers would leap back to January 1st 1900 and that as a result there would be no electricity and aeroplanes would fall out of the skies. The hoax or false flag operation was created and maintained by software promoters who sold solutions and made $6 billion out of the nonsense.

But none of these false flag operations comes close to the two false flags which governments around the world are currently flying and which are being used to persuade the masses to accept a totalitarian world government, a series of oppressive control measures, brain washing, designed to weaken and break people, a toxic and entirely unnecessary programme of medication and the Great Reset – all to take us into a world in which we will own nothing and have absolutely no control over our lives, our homes, our bodies or our future.

First, of course, there is the covid-19 fraud, which I first labelled the coronavirus hoax in the middle of March 2020. The covid fraud was carefully and deliberately designed to terrify and to control. It is based on an entirely false premise – that we are currently exposed to a dangerous disease which threatens our existence and which can only be countered if we allow our governments to adopt extraordinarily strict measures of control over everything we do, everywhere we go and everything we think. In order to promote the fraud, governments have taken complete control of the mass market media, outlawed debate and attacked and demonised anyone, particularly anyone who might know what they are talking about, who dares to question the official lies.

Second, there is the global warming fraud: the underlying deceit which was conceived and planned half a century ago and which is designed to terrify us into accepting a new world order, and a single, unelected, undemocratic world government. Once again the global warming fraud is built upon deceit and absurdly inaccurate pseudoscience. The aim is, quite deliberately and cold bloodedly to destroy the world economy by banning the use of essential fossil fuels, to cause the deaths of billions by starvation, cold and the inevitable wars which will ensue as people fight to survive. Once again all opposition, all questioning is outlawed. Once again those who question the lies are attacked, vilified, ostracised and marginalised.

The global warming scam is, like the covid-19 scam, built on sand. Both these false flag operations are built on false science, on threats, on deliberately manipulated fear and on chaos and confusion.

There will be variations on these themes. I expect to see more reports that those questioning the Government’s covid programme have been arrested for violence against individuals or clinics. This will be done so that all opposition to any vaccination can be classified as terrorism. They’ve wanted to do that for several years.

The people behind these false flag operations are evil almost beyond comprehension. The front men, Schwab, Gates, Blair and so on are merely puppets dancing to tunes orchestrated and conducted by dark and sinister figures who have personal objectives so corrupt and so terrifying that our natural human instincts reject them as inconceivable.

But people are that evil.

And they are about to take total, final control of our lives, our world and our future.

Time is running out fast.

If you want to know more about the global warming scam please read Greta’s Homework by Zina Cohen. It’s subtitled ‘101 Truths about Climate Change that Everyone Should Read (Especially Hysterical, Hypocritical Mythmakers)’. It’s available on Amazon as a paperback and an eBook. 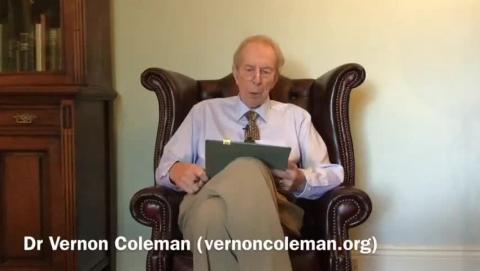 More Evidence ‘They’ Want You Dead 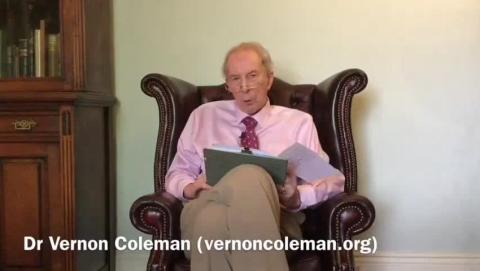