They Killed Granny - Now They're Going to Kill the Kids

Listen carefully to what I’ve got to tell you.

If you’re a human and not a zombie this will fill you with rage. If the squaddies in the 77th Brigade listen properly even they are going to think twice about pressing the thumbs down button.

On the 15th July 2021, the UK Government’s advisors the Joint Committee on Vaccination and Immunisation said: `until more data become available JCVI does not currently advise routine universal vaccination of children and young people less than 18 years of age.’ They added that the `the health benefits in this population is small and do not outweigh the potential risks.

Splendid, I thought. Send up a rocket.

And then a few weeks later, on 4th August, the committee changed its mind after the UK’s Chief Medical Officers requested that JCVI accelerated its review of advice for jabbing children.

They admitted that covid-19 disease in children is typically mild or asymptomatic. But they changed their minds and said that all 16 and 17-year-olds be jabbed. And that many children aged 12 and over be jabbed.

One odd thing was that they said that `in recent weeks, reports have been submitted about myocarditis.

Take a look at my video dated 8th December 2020 entitled Covid 19 vaccine – possible vaccine side effects and you will find that I listed myocarditis.

So how come I knew about this risk half a year before the Government’s advisory committee? Not boasting but I’ve been half a year ahead since early 2020.

I can’t find any new evidence that would have changed their minds.

But the minds changed.

The membership of the JCVI’s subcommittee on covid changed and one prominent critic of covid jabs for children coincidentally left. Three other members changed too. Gosh. However, committee members said that they had not felt any political pressure to change their views on giving the jab to teenagers. How reassuring.

Politicians, advisers and doctors should know that the experimental jab will kill children – almost certainly kill or injure far more than would be killed or injured by this year’s flu: covid-19.

And there won’t be one in a million of these jabbed children who will understand that they’re taking part in a massive, unethical, immoral and illegal experiment. The Joint Committee says `in all instances, the offer of vaccination to children and young people must be accompanied by appropriate information to enable children and young people…to be adequately appraised of the potential harms and benefits of vaccination as part of informed consent prior to vaccination.

That’s called covering your back.

The queen, Dolly Parton and a bunch of influencers on social media will say it’s OK. The kids will be bribed. And not one in a thousand doctors or nurses will explain the risks in detail.

What am I saying: I bet not one in a thousand doctors or nurses have any idea of the risks.

And the idea that 16-year-olds will understand these complicated vaccines would be laughable if it were not obscene. Most kids think the jab will stop them getting covid. And stop them spreading it to granny.

Not that this matters much because the Government killed granny last year.

And all this is illegal.

Back in February, six months ago, I pointed out in a video entitled, Doctors and Nurses giving the covid-19 vaccine will be tried as war criminals that the Nuremberg Code on medical experimentation, which was written in 1947, stated that explicit voluntary consent from patients is required for human experimentation.

And as I said, I doubt if one in a million adults was properly advised.

Once again, as I said back in February, any doctor or nurse giving one of these experimental jabs without making sure that their victim has been given all the necessary information, and understands it, is breaking international law and will go to prison.

The fact is that the whole vaccination programme is built on lies and deceit. Governments and the media wouldn’t need to lie, harass and suppress the truth if there really were a plague and if the experimental injection really worked. People would be fighting to get jabbed.

Of course, if there really were a plague there wouldn’t be a vaccine. The vaccine’s promoters are mostly on record as saying that they want a smaller global population. So if there were a killer plague they wouldn’t want a vaccine, would they?

Accepting this experimental and unnecessary jab is the most important decision any citizen will ever make. The so-called vaccine is for ever. It isn’t like a drug that you can stop and get over. The covid-19 jab stays. You can’t get it out. And no one, repeat no one, knows what the effect will be in six months or six years or sixteen years. It’s an experiment and the preliminary part of the experiment won’t be over until 2023. The vaccine has already killed thousands of people and injured millions more. Just look at the updated figures on my website where I quote the official death and injury figures published by the British and American governments.

Will the vaccinated be more susceptible to new variations? Will they die when they contract winter viruses? No one knows the answers.

The risks are so great that I believe that anyone who has been jabbed – particular the young who seem to be particularly liable to heart damage - should avoid all strenuous exercise and stress.

Meanwhile, the promotional campaign to sell the jab to kids is moving fast. Free money. Free kebabs. The chance to reclaim a little of the life that was taken from them.

The disgusting BBC and the rest of the mainstream media become indecently orgasmic with excitement when they find someone who hasn’t been vaccinated and who has died of or with covid-19 (aka the rebranded flu) or, probably, anything else. They ignore the fact that every year, in the six month flu season, up to 650,000 people of all ages die of the flu worldwide. Often ordinary healthy people.

But the deception and the lies about the rebranded flu just keep getting bigger.

The truth is that these experimental jabs have not been sufficiently tested, do not do what most people think they do and are so dangerous that their distribution should be halted immediately.

Doctors who object, who point out the dangers, and who explain why the risk benefit ratio shows that the people producing, and promoting these damned things should be locked up, are monstered and silenced and lied about and offered mental health care – just as if we were in Russia in Stalin’s time. Objections are dismissed without debate. There is no debate. Never before in my knowledge has a drug been introduced and used so widely with no discussion. For 18 months I’ve been asking government advisors to debate with me on live television.

We pay them. They ignore us.

All this proves, of course, that the promotion of this experimental product is a heinous fraud.

Meanwhile, the majority of doctors will accept the lies, promote the jab and take the big money they’re being paid.

When these disgusting women and men are arrested – as they will be – I hope they are shown no mercy. They are, man and woman, guilty of some of the most awful crimes in history.

Please go to vernoncoleman.org and email this video – together with the transcript - to every school and doctor’s surgery in your area.

I’ll leave you with this.

The UK Government admits that the longer term health effects from the myocarditis events reported are not yet well understood.

They’ve killed the grandparents. Now they want to kill the kids.

Vernon Coleman’s bestselling book on vaccines is called Anyone who tells you vaccines are safe and effective is lying – here’s the proof. It’s available on Amazon as a paperback and an eBook. 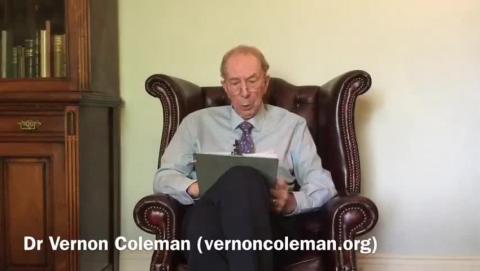 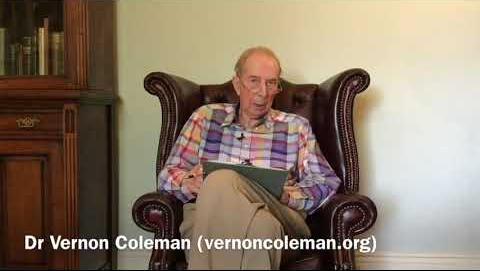 Health Care is Worse Today than it was 50 Years Ago