If you have a child, know someone who has a child or care about children the next few minutes are probably the most important of your life.

In the UK, the Government is rolling out covid-19 jabs to children, despite the fact that evidence suggests that the jab is more likely to do serious harm to a child than covid-19 itself. Not much research has been done but it is known, for example, that the covid jab is up to six times as deadly to boys as covid-19.

I’ve been studying drug side effects for over half a century and until 18 months ago I was reckoned to be one of the world’s leading experts on drug companies and adverse events. I used to be invited to speak to doctors and nurses and other health professionals. Since March 2020, of course, the Government agents who control pages on Wikipedia and Google officially downgraded me to a discredited conspiracy theorist.

In my honest view, any doctor, teacher or health worker promoting the covid jab to children should be arrested for attempted murder. I believe that any doctor, teacher or health worker not thoroughly explaining that the jab is experimental and then providing a full list of the potential hazards is in breach of the Nuremburg protocol and will go to prison. Actually, I doubt if more than one in ten thousand doctors, teachers or health workers promoting the covid jab understand that they’re pushing an experimental jab. Those who want to know the side effects should watch my video dated 8th December 2020 entitled Covid-19 Vaccine – Possible Side Effects. They should then watch my video dated 2nd February 2021 and entitled `Doctors and Nurses Giving the Covid-19 Vaccine will be tried as War Criminals’. Both videos are available on Brand New Tube.

Some schools are hurrying through these jabs. What’s the reason for the haste? Anxiety lest too many parents discover the facts? I can think of no honest reason for all the hurry. It seems to me that they are weaponising children to kill old people. The genocide continues.

Please share this video – or the transcript – with everyone who still has functioning brain tissue. This is another crucial video.

Now, it isn’t just the covid jab. Things are getting worse.

There are plans to give children a nasal flu vaccine as well as the covid jab.

The nasal vaccine proposed for children will, according to information I’ve received from a disreputable organisation called the National Health Service, be a live flu vaccine. With a live attenuated flu virus in it. An attenuated virus is merely one that’s weaker than usual. It’s still live. Because viruses mutate there is no guarantee that the viruses used won’t revert to an infectious version.

The official NHS leaflet is very reassuring. It says those who have the nasal spray for flu may develop a runny or blocked nose, headache, general tiredness and some loss of appetite.

However, I’m rather more sceptical. The side effects with the nasal vaccine are potentially horrific – and include neurological and behavioural problems.

The British National Formulary, published by the UK’s National Institute for Health and Care Excellence says that side effects with the nasal spray flu vaccine include nasal complaints, nose bleeds, facial oedema, and Guillain-Barre syndrome which is a rapid onset of muscle weakness and which can be fatal in about 7.5% of those who develop it. Complications of Guillain-Barre syndrome include breathing difficulties, heart problems and blood pressure problems. Those who recover can take years to get better.

The NHS presumably forgot to mention that. Or maybe they couldn’t get the information on their leaflet.

However, the official NHS leaflet promoting the flu vaccine to children (the official NHS leaflet I’ve seen seems directed at children not parents) suggests that children should keep away from those with damaged immune systems for two weeks. I don’t know why they say two weeks. That figure probably came out of the same broken down computer that told the Government that social distancing meant staying six feet away from everyone else. That was always a figure plucked out of the air. A more sensible figure would have been 30 feet but that would have made it difficult to have Biden and Fauci or Whitty and Valance in the same room.

Just how skilful children will be at assessing the immune systems of those around them is unknown. But now that children aged 12 are assumed to be able to make decisions about the long-term safety and effectiveness of mRNA vaccines without being given information by the person at the other end of the needle it is reasonable to assume that the Government believes that children will be able to make a rigorous assessment of the immune systems of other family members.

You can imagine the teacher, can’t you?

`Today, children, instead of writing an essay about what you did in your summer holidays, I want you to write a paper on how the nasal flu spray may interact with the experimental mRNA jab, with particular reference to those individuals with compromised immune systems. And then, children, explain how the Government will blame the extra deaths on covid-19. You have twenty minutes to complete your essay.’

How safe will the attenuated nasal spray for the flu be this year – especially when many doctors argue that eighteen months of lockdowns, masks and social distancing mean that millions of immune systems may have been weakened?

I couldn’t tell you that. I don’t think anyone else could either. It’s probably safer than lying down on a railway track when you can see the train coming. But not as safe as NOT having the stuff sprayed up your nose.

And how effective will the flu spray be?

Well, it’s worth remembering that in 2016 the Center for Disease Control and Prevention in the US pulled a nasal flu vaccine because it was only 3% effective. The CDC stated that no protective benefit could be measured and that the vaccine had not been statistically effective for three years running. Still, that’s a fact. And governments and doctors and the media don’t approve of facts.

And how safe is it to give the nasal flu vaccine to children who are being given a covid-19 jab within a few days?

No one knows the answer, of course.

Now you know more about the flu spray than the school will tell you. And you and your child can make a better informed decision.

Oh, and there are also rumours that the HPV vaccines will be given at the same time.

Just for the record, the National Vaccine Information Centre in the US reports 591 deaths from this vaccine. There were 25 deaths of children aged 9 to 12 and 101 deaths of children aged 12 to 17. Those are the American government’s figures. Remember, less than 1% of adverse reactions are reported to VAERS so the real figure will be much higher.

How safe will it be to give that at or around the same time as the covid jab or the nasal flu vaccine?

No one on earth could tell you the answer to that either. Not for another year or two anyway: children are now officially no more than guinea pigs.

At a time when millions are being given experimental jabs which do things to the body as a whole and probably to the immune system in particular and which no one yet understands (because the whole thing is, after all, officially an experiment) the authorities in the UK are planning to give a live attenuated nasal flu vaccine to children at roughly the same as they’ve giving them the covid-19 jab. Not even Dr Whitty or Dr Fauci could argue with me when I say that the nasal flu vaccine, being only weakened and not killed, may then result in someone with a poor immune system being infected and dying. There goes Granny and Grandpa. And I believe children will also be in danger.

Oh, and again it is now known that the lockdowns, lack of sunshine and so on will have also affected the immune systems of millions – making them more vulnerable to infection.

Oh, and as I have mentioned, remember that in some places they are also giving the HPV vaccine at roughly the same time, to some age groups, though no one has tested to see if that might interact with everything else over the coming months and years. Or, indeed, whether all these injections will sit comfortably with all the other injections routinely given to children. No one’s bothered to find out.

Oh, and millions will find it difficult to keep warm this coming winter because the nutty virtue signalling pseudoscientists who believe in global warming have forced through policies which will result in energy prices soaring into the stratosphere. And this will make millions more vulnerable to infection.

Oh, and I almost forgot, as I pointed out in a video in July 2020, over a year ago, Pfizer, maker of one of the covid-19 jabs was previously fined £84.2 million for overcharging the NHS by 2,600% and in the US the company was hit with a $2.3 billion fine for mis-promoting medicines and paying kickbacks to doctors. The last time I exposed Pfizer’s track record, sometime last year, the company was up near the top of a list of the most fraudulent companies in the United States. And yet the Government, the media and tens of thousands of doctors and celebrities want to trust them with your life. After all they do make absolutely hugely obscene amounts of money. Genocide has always been immensely profitable. They will blame the extra deaths on covid-19 – an excuse for more jabs.

Of course, don’t think badly just of Pfizer. Most of the other drug companies are just as rotten. If they made cars, socks or toasters no one would buy anything from any of them. But who cares what is in the drugs that doctors want to inject into your child’s body?

Incidentally, am I the only one to find it odd that pregnant women won’t smoke, drink or eat soft cheese but they’ll happily accept an experimental injection when no one knows just what it will do to them or their unborn baby? It’s an experiment.

Finally, Government ministers and advisors claim they are following the science and that I am a discredited conspiracy theorist.

Well, I’d rather be demonised as a discredited conspiracy theorist than work for, represent, or promote any government anywhere in the world in any capacity.

Governments are promoting fear, and moving faster and faster to reach their aim. This a propaganda war – managed with the help of the mainstream media. The next week or two are vital.

Vernon Coleman’s book explaining how we got here and where the evil cabal is taking us is called Endgame. It’s available as a paperback and an eBook. Read `Endgame’ so that you understand the past, the present and the future. 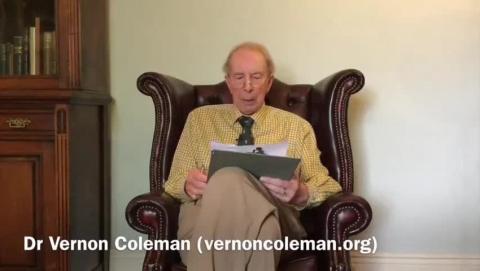 Time is Running Out Fast 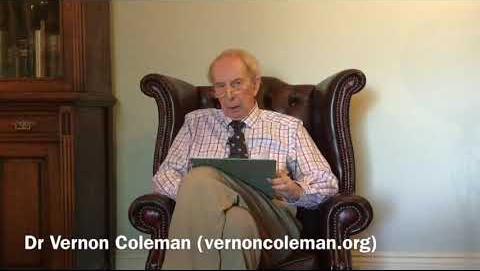 Walking around in Circles