The National Institutes in the United States has just published information about a trial examining the safety and effectiveness of a new inactivated whole virus universal influenza vaccine. It’s called BPL 1357 and the BPL refers to betaproprolactone which is used as a disinfectant to destroy the nucleic acid core of viruses.

The first thing you should know is that the initial study will involve 45 participants.

Now this immediately screams at me because a trial involving 45 people isn’t enough to mean diddly squat.

If 1 in 100 people drops down dead within a day of having this new vaccine the chances are that no one will drop down dead in this trial because there are only 45 people involved and only 30 of them are going to be anywhere near the drug and only 15 – that’s 15 as the number of people in a rugby team – will have the drug jabbed into them.

And if 1 in 1000 people has a heart attack and dies within a day of having this jab it is very unlikely that anyone will die during this trial.

But what worries me is that governments and drug companies are these days rolling out new products very quickly. And most doctors can be bought with big fees and don’t care.

So, here’s my worry.

If this new vaccine against the flu is rolled out to a billion people – and these days that seems to be the trend – and 1 in 1000 have heart attacks and drop dead then a million people will die.

What if people only develop serious health problems after five years?

The thing is that you really need to test new drugs on lots and lots of people and introduce them slowly before providing them to millions or billions of patients. In the old days a new vaccine could take 15 years to test properly – and even then I wouldn’t consider it properly tested.

But that’s not what they do now.

And there is another problem.

Now what all this means is that the new vaccine is not being tested on any people who have the above conditions or who are outside the age range. This is a phase 1 trial and the people involved in it must satisfy very specific criteria.

What worries me is this: is there going to be a phase 2 trial or is there a danger that the results of this trial could be used to launch the vaccine for mass use?

The tendency these days – as we saw with the covid-19 jab – is to roll out new products very quickly even though the testing might not be considered entirely adequate and even though there might be no long-term testing done at all.

This new vaccine is described as ‘very different than nearly all other vaccines’. But the initial trial will involve just a handful of very carefully selected people. It’s different. Oh goody. It’s like a car with one wheel or a politician who tells the truth or a pig that flies.

And we should remember all this if governments and doctors suddenly jump up and tell us that this brand new type of vaccine has passed its trial and can be given to seven billion people.

There is already talk of giving a new covid vaccine without any tests at all. The rules have changed. Or, rather, there are no rules. We’re in a knife fight with drug companies and doctors. Beware. Take care. Don’t believe what governments say. Warn everyone.

Thank you for watching an old man in a chair. Thanks to Muhammad Butt and Brand New Tube for the platform. Please spread my videos about on other platforms such as Bitchute. My thanks to everyone who does this. Please do translations too and spread old videos around too – though it’s helpful if you put the date the video was first aired in the description box. For the record, this channel has not been monetised – none of my videos ever HAS been because I don’t want ads on my videos. There are no ads, no sponsors and no requests for funds on videos or websites.

Please visit my own websites www.vernoncoleman.org and www.vernoncoleman.com. There are free articles and new stuff is added most days. The books section on www.vernoncoleman.org contains details of my banned book Covid-19: Exposing the Lies which is now available at last. Remember, too, I’m banned from all social media. Anything you see with my name on it on Facebook, Telegram, Linked-In, Twitter or anywhere is fake and should be reported.

Finally, although it may feel like it at times, please remember that you are not alone. More and more people are waking up and once they are awake they don’t go back to sleep. We are already a far bigger force than the conspirators would have you believe. Over a third of the populations of the US and UK haven’t had a single covid jab.

If we are going to win this war then we have to fight hard and with determination and passion and the truth. No mask, no test, no jab.

Distrust the government, avoid mass media and fight the lies.

And, remember, we have God on our side.

Thank you for watching an old man in a chair.

Vernon Coleman’s book on vaccines is called Anyone who tells you vaccines are safe and effective is lying. It is available as a paperback and an eBook. 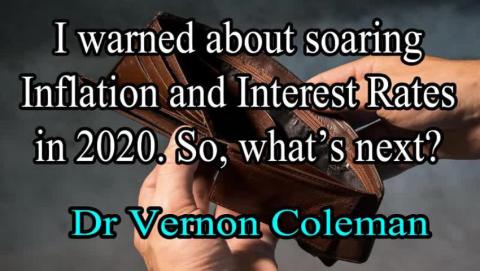 I warned about soaring Inflation and Interest Rates in 2020. So, what's next?