Lies on the BBC will Result in Children Dying

As you know, the BBC is the most dishonest, disreputable, unreliable media outlet in the history of the world. It’s ageist, sexist, bigoted, unpatriotic and as bent as a paperclip. Over the last year I have recorded a number of videos detailing their errors and distortions. One BBC presenter has even boasted that the BBC will not tell the truth about vaccines – they deliberately suppress those who do tell the truth about vaccines and vaccination. And they do this even when they know that they are suppressing the truth.

There is no secret about why the BBC is hiding the truth. The BBC has close links to the drug industry, the crooked, corrupt vaccine makers, and is, of course, desperate to keep its licence fee by sucking up to the Government.

Now it seems that deceiving adults isn’t enough. The BBC is now deliberately lying to children.

On the 8th June the BBC ran an item headed Pfizer vaccine for children – your questions answered.

The BBC put questions to someone called Professor Devi Sridhar, who is apparently Chair of something called Global Public Health at the University of Edinburgh. They have to put the word global into it, don’t they? Presumably, to show their enthusiasm for Agenda 21. I’m surprised they haven’t got the word sustainable in there too.

The benefit of getting the vaccine is that you don’t need to worry about covid-19. It means you’re likely to not infect your parents, the people you live with and your teachers.

This wretched woman Sridhar, who will surely burn in hell, claims that the vaccine is 100% safe for children.

And she is really reassuring about the side effects.

Some children experience similar side effects to adults – these include fatigue, having a headache, feeling generally unwell, but these cleared within a day or two. And it seems a small price to pay for actually being protected from the real disease.

So let’s take those three statements and analyse them.

First, she says that if you have the vaccine you won’t be likely to infect your parents and the people you live with and your teachers.

Where did she get this from? Who is her medical advisor? The Queen? Dolly Parton? Dermot O’Leary?

Well, it’s not what the NHS says.

you might still get or spread covid-19 even if you have a vaccine.

In other words the vaccine doesn’t stop you getting covid or spreading it if you do get it. What it does do, allegedly, is reduce the symptoms you might get. That’s hugely different. What an unbelievably arrogant and stupid woman Sridhar is to pontificate about something she knows nothing about and clearly doesn’t seem to understand.

Second, Sridhar says this experimental vaccine, which only has a temporary approval let us not forget, is 100% safe for children.

And for that lie alone this bloody woman should be hung, drawn quartered, boiled in oil and tarred and feathered.

Sridhar is lying to children who are susceptible and vulnerable and terrified out of their wits by a year of unremitting propaganda.

So, what’s the truth?

The truth is that in America, the data up to the 28th May 2021 for 12 to 17-year-olds shows that there have been 4,740 total adverse events including 117 rated as serious and four reported deaths. Two 15-year-olds died and a 16-year-old and a 17-year-old. Those are the confirmed deaths. There are others not yet confirmed.

And this grinning, ignorant Professor Devi Sridhar of the University of Edinburgh says it’s safe.

Well, you horrid woman, death isn’t safe. Death is final. It means it’s all over. And this experimental jab is safe like being run over by a bus is safe.

No healthy children have died of this year’s remarketed flu. Children get very few serious symptoms from covid-19.

But in the US, at least four children have already died of the experimental jab.

Third, the stupid, stupid, stupid Sridhar, whose name should now be immortalised along with Myra Hindley and Rose West, is reassuring about the side effects. Just a bit of tiredness and a headache.

That is another absolute bloody lie.

And 16 reports of blood clotting disorders.

And what about pathogenic priming?

And the real risk of menstrual and fertility problems.

And all this, let us remember, for an experimental jab intended to reduce symptoms caused by the rebranded flu – covid-19 – a disease which kills mainly people over 80 who are already dying of something else.

What’s Sridhar going to do next?

Make no mistake this Devi Sridhar is a menace to children. Her advice could result in millions of children dying. She should be struck off the medical register.

Except she can’t be.

Because she isn’t a doctor.

She isn’t a doctor. Presumably the BBC couldn’t find a proper medical doctor to praise this toxic jab. So they dug up Devi Sridhar.

She has never syringed an ear or removed an appendix or written a prescription or made a diagnosis.

She isn’t a medical doctor. I am. She isn’t.

And believe me this woman does not know what she is talking about. She is the sort of charlatan that the BBC should be exposing in my view. The newspapers should tear her apart. But they won’t. Because they are all bought too.

And so this ignorant, arrogant woman will continue to spread lies that will lead to death, pain and agony.

The latest figures from the UK Government show that in the UK the side effects involved with this jab include serious neurological problems, heart attacks, strokes, blindness and many other serious disorders. I think it is an insult to the patients who have been damaged to describe their side effects as mild.

Kids, who have smaller more vulnerable bodies, are being given the same toxic junk as adults but up until the end of May 2021 these jabs had been responsible for 4,406 deaths in the US and 1,213 deaths in the UK. The VAERS figure for US deaths is now 5,165 and rising fast. Those are official government figures and they are low because less than 1 in 100 adverse events in the US is reported, and in the UK it’s probably between 1 and 10%. Many deaths have been ignored or dismissed as coincidental. There is a pandemic of coincidences. In the US there had been 1,214 cases of anaphylaxis. Horrifyingly, 14,986 had needed hospitalisation and there had been 34,474 urgent health problems. In the UK there had been 1,213 deaths caused by the jabs and 859,481 total adverse reactions. Many people have gone blind.

Those are all official government figures Ms Sridhar. The truth is that the total killed and injured by these damned jabs will turn out to be far higher than the figures I’ve given. The figures for Europe and the rest of the world are just as scary. Weekly deaths all around the world have soared as more and more people are injected with this toxic junk. Women everywhere are noticing changes to their monthly cycle. And that’s crucial.

Over half of GPs said they would not have the toxic jab. In the UK the Government has admitted that despite putting NHS staff – hospital doctors, nurses, porters and bureaucrats – under pressure at least 20% have refused to be jabbed.

Perfectly healthy children are probably no more at risk of dying of covid-19 than they are of being killed by lightning? No previously healthy child under the age of 15 has died of covid-19 in the UK. Most children have hardly any symptoms if they do catch covid-19. Why would you jab against something so irrelevant?

What the hell is going on? Well, we know the BBC is linked to the drug companies via the Bill and Melinda Gates Foundation, but what about this pathetically patronising Sridhar woman?

The same wretched little BBC programme – which I am told is now being shown in schools by moronic teachers who believe the BBC is a broadcaster and not a bought and paid for propaganda unit for the drug industry, also contains a quote from the BBC’s paid misinformation expert, the equally wretched and disgusting Marianna Spring whose qualifications, for all I know, consist of an O’Level in domestic science and a bronze medal for the hop, skip and jump. Ms Spring says:

Those who make anti-vax claims usually don’t have a scientific or medical background.​​

Now that is odd because I know a lot of medical doctors who are, by the BBC’s definition, anti-vaxxers. In fact I could find more doctors who oppose giving this toxic vaccine to children than she or the BBC could find supporting giving it to children.

There’s another little challenge for you Ms Spring – to add to the other challenges I’ve offered the BBC – all of which have been rejected.

See how many doctors – real medical doctors – you can find who think giving covid-19 jabs to kids is a good idea and I’ll find more who know it’s dangerous lunacy.

And that probably explains why instead of finding a GP or a hospital consultant or some other doc with a stethoscope, to lie to kids they dug this Sridhar out of the cave where she presumably lives.

The BBC has betrayed us for a long time now.

But this is a new low.

Are they deliberately trying to kill as many children as possible?

I’m going to be doing another video about the BBC, about Ms Spring and about media doctors who are real, proper medical doctors but who have misled and lied to the public.

In March 2020, well over a year ago, I warned that this was all going to be about pushing vaccines onto the public. People laughed and sneered. But that’s exactly what is happening.

There is no excuse for lying to children like this.

I don’t believe in the death penalty. But I’d bring it back for these two.

Send copies of this to Edinburgh University and the BBC as well as the media everywhere. My wife has sent out over 300 emails. If everyone watching this does the same or a half or a quarter of that then we will defeat them.

The truth deniers are so frightened of the truth that they are blocking everything I do so send people direct to www.vernoncoleman.org.

Vernon Coleman’s book on vaccination is called, Anyone who tells you vaccines are safe and effective is lying – here’s the proof and it is available on Amazon. It deals with the history of vaccines and vaccination and is essential, sometimes shocking reading for anyone interested in this area of medicine. It will almost certainly surprise you. 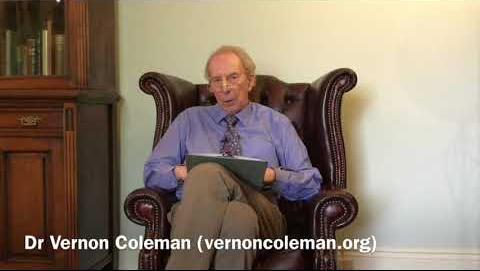 Ignorance and Prejudice in Medicine 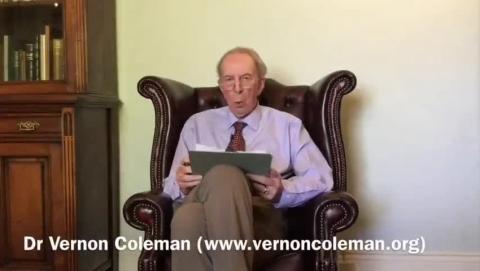 Proof the Covid-19 Jabs Should be Stopped Now