You know the old story about the patient taking lots of different coloured pills. I thought I’d invented it three quarters of a lifetime ago but I think it probably started as a music hall gag a hundred years ago.

A few years ago I created 12 laws of medicine designed to help patients get the best out of doctors and hospitals. I turned the laws into a book called Coleman’s Laws and I’ve decided to record a series of short videos describing these laws.

Doctors are notoriously reluctant to admit that the treatments they recommend can do harm.

There are several reasons for this.

Second, they are frightened of being sued.

And finally, there is a natural human unwillingness to admit responsibility for something that has gone wrong. Admitting to having made someone ill reminds doctors that they are mortal and fallible.

Because doctors almost never admit that the drugs they have prescribed might have caused unpleasant or dangerous side effects, very few incidences of drug-induced illness are reported to the official watchdogs which exist to measure and assess drug side effects. How many is very few? Probably no more than 1%.

This enables doctors and drug companies to claim that prescription drugs are safe. The word ‘safe’ is, of course, relative. Even though the number of reported side effects is absurdly low, doctors are now officially one of the top three causes of death and serious injury in the world. They share the top spots with cancer and circulatory disease such as heart trouble and strokes.

The problem is that side effects are far commoner than most people (including doctors) think. Four out of every ten patients who take a prescription drug will develop side effects. Some side effects will be mild and others will be unpleasant but many will be dangerous and life-threatening.

Drug side effects can (and usually do) cause problems when you least expect them. None of us is immune. And both doctors and patients are usually far too slow to consider drug side effects when they are looking for a cause for new symptoms. We are all likely to forget or under-estimate the danger.

After I damaged my shoulder joint I started taking soluble aspirin to reduce the inflammation.

On a trip to France I started using a local variety of soluble aspirin. It dissolved much more speedily than the English variety.

My shoulder was improving nicely.

But then I developed another, quite separate problem. I started getting severe muscle pain in my left calf.

My wife, asked if it could be due to the aspirin. I dismissed her fears. I was taking only a small dose of aspirin — and had been taking the same dose for some time without trouble.

Because the pain had started while I was walking my first fear was that it was intermittent claudication — indicative of a blocked artery in my leg. But my pulse was good so I wondered if I could have a deep vein thrombosis. It seemed extremely unlikely since aspirin is a good anti-clotting drug. I compared my painful calf with my other one using my tie as a substitute for the tape measure I didn’t have. The painful calf wasn’t swollen. Besides, the pain was too much like a cramp.

That night I hardly slept.

. What could cause such severe muscle cramps?

And then it occurred to me that a metabolic alkalosis is another possible cause of cramps.

Why could I be suffering from a sudden alkalosis?

My wife was still quietly and politely wondering about the aspirin.

I stopped the aspirin. And the cramps disappeared.

And so came Coleman’s 1st Law of Medicine which states that if you have a health problem which requires treatment and you acquire new symptoms then the new symptoms are probably caused by the treatment you’re taking.

According to the Journal of the American Medical Association: ‘Reactions to prescription and over-the-counter medications kill far more people annually than all illegal drug use combined.’

Many huge-selling drugs are launched on the basis of trials involving relatively few people. So, for example, consider a trial which involves 100 patients. If just one in 1,000 people who take the drug dies from it the chances are high that the trial of 100 patients will show nothing amiss. But if the drug is then assumed to be safe and prescribed for 10,000,000 people worldwide (a highly likely occurrence) it means that 10,000 people will die as a result of taking the drug.

This sort of carnage is probably acceptable if the drug is life-saving and is only prescribed for patients who might otherwise die.

But if the drug is prescribed for something which is not life-threatening (such as hayfever) then all those deaths are entirely unnecessary.

A friend of mine was prescribed a drug called prochlorperazine.

Within hours my friend had developed bad dizziness when sitting up and a new symptom: ataxia (which meant he had difficulty in controlling body movements.) He telephoned the doctor and reported what had happened. The doctor immediately changed his diagnosis and told my friend that he might have a brain tumour. He increased the dose of the prochlorperazine and said he would arrange for a brain scan to be performed. When the dizziness and the ataxia got even worse my friend’s wife telephoned me to tell me what was happening. She was, not surprisingly, in tears.

‘He’s on prochlorperazine?’ I asked.

‘Yes,’ she whispered. ‘But it doesn’t seem to be helping.’

‘Stop it,’ I told her. ‘Stop the prochlorperazine.’

They stopped the prochlorperazine.

The dizziness on sitting up and the ataxia were gone within hours. There was no brain tumour.

Both symptoms are possible side effects of prochlorperazine.

Here’s another true story about drug side effects.

A reader of mine, an elderly man went to his local surgery complaining of breathlessness.

A nurse gave him a spirometer to blow into. (A spirometer is a simple instrument which measures lung function). My reader huffed and puffed but could not do much with it. So on the basis of this single test the nurse diagnosed Chronic Obstructive Airways Disease (COPD).

Making this diagnosis was a pretty stupid (not to say dangerous) thing to do. If my reader had put his hands around the nurse’s throat she would have not been able to blow into the tube either. But it wouldn’t prove she had COPD.

‘You have a chronic cough and bring up sputum every day, don’t you?’ she said.

My reader had no other signs or symptoms of COPD. His medical history did not suggest that he was a likely candidate. But satisfied with her diagnosis the nurse then exercised her newly acquired right to prescribe and prescribed a steroid spray. Steroids are, of course, enormously powerful and equally dangerous. They should only be prescribed when absolutely essential.

Since my reader didn’t have COPD the steroid spray didn’t work. So the nurse gave him a spray containing both a steroid and another chemical. Since the diagnosis was wrong this did not work either.

My reader then went back to the nurse and told her that the medicine she’d prescribed wasn’t working. The nurse doubled the dose.

Unfortunately, the digoxin slowed my reader’s heartbeat so much that he started getting chest pains. So the doctor, probably fearing that the digoxin might slow the circulation, create a blood clot and cause a heart attack, started my reader on warfarin to stop his blood clotting.

My reader’s breathing problem was still no better so he then had an X-ray which showed that a fall he’d had some weeks earlier had resulted in several crushed ribs. That’s why he was having trouble breathing.

My reader, however, was now taking steroids, digoxin and warfarin (three very potent drugs) and was considerably worse than he had been when he’d first visited the nurse.

Naturally, the doctors involved refused to accept that the drug he’d been given could have caused the atrial fibrillation that had required the digoxin and then the warfarin.

It was rather akin to arguing that if a man who was hit on the head with a hammer subsequently developed a headache there was no connection between the two, or that if a man got a broken arm after falling down stairs the break was merely a coincidence.

Doctors who have prescribed drugs which have caused serious side effects rarely admit that there could be a link between a drug they have prescribed and a worsening of the patient’s condition. Doctors prefer almost any solution other than the awful one that a patient has been made ill by a side effect, because that means it was their fault (with all the legal and moral overtones that carries).

Drug companies, which sometimes seem to me to thrive on creating illness, often make things worse by manufacturing compound drugs which actually contain two or more drugs in one tablet or capsule. The only advantage of this is that it enables them to make many people ill. And, of course, people who are ill are usually given yet more tablets.

Don’t just ignore it if you’re taking a drug and you develop new symptoms. Report it to your doctor straight away though obviously you shouldn’t stop medication without asking his advice first.

Some side effects are mild and if the drug is working and helping to control or defeat a serious or life-threatening condition then the side effects may be of little consequence. But other side effects may kill. Many of the thousands who die each year could still be alive if they had taken action earlier when side effects started.

The medical profession’s obsession with drugs means that many doctors still regard drug side effects as merely a reason for reaching for the prescription pad and writing out a prescription for yet another drug. As a result, countless millions of patients around the world are regularly given drugs which do nothing but cover up the side effects of other drugs which they are taking. The original problem may well have disappeared but the symptoms caused by drugs continue.

Time and time again a patient who is receiving treatment for one condition will go to a doctor complaining of new symptoms and simply be given a prescription for a new drug. Sadly, most doctors are still unaware of Coleman’s 1st Law of Medicine.

It is, I believe, this basic ignorance, fostered by too strong a trust in the pharmaceutical industry, which explains why some doctors show signs of being every bit as intelligent and percipient as living room furniture.

This problem is now so widespread that I believe that any doctor wishing to make a quick name for him or herself could probably obtain a staggeringly high cure rate simply by collecting patients and then encouraging them to wean themselves off their prescription medicines.

I think one could, quite conservatively, expect a dramatic and long-term improvement in a third of the patients encouraged to stop taking their pills.

I do stress, however, that stopping or cutting down pills must be done under qualified medical supervision. You might need to take the drugs. And some drugs need stopping slowly to avoid dangerous withdrawal effects.

Finally, never, ever trust a doctor or anyone else who tells you that a drug of any kind is free of all side effects.

If it’s a doctor – leave his consulting room as quickly as you can. And never go back.

Adapted from Coleman’s Laws by Vernon Coleman – which is available on Amazon as a paperback and an eBook. 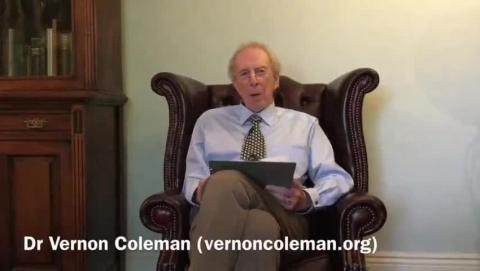 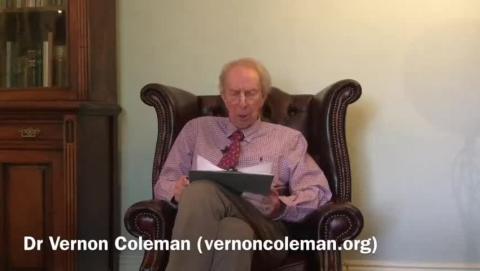 Most Mask Wearers will be Dead or Demented in Ten Years