This is the Battle that could WIN us the War

I have, for almost 18 months now been asking Chris Whitty and Patrick Vallance to debate with me. Whitty is, of course, the UK’s chief medical advisor and Vallance is the UK’s chief scientific advisor. Since they and their chums have closed down the country and since their lockdowns will result in millions of deaths, it seemed to me reasonable that they would debate their decisions in public. It is, after all, what scientists usually do.

But they have steadfastly refused to debate with me. They know darned well that if they try to defend their decisions they will lose and the truth will destroy them and governments around the world.

To be honest they would both start off a debate with a disadvantage.

Whitty has worked with the Bill and Melinda Gates Foundation – which has close links to vaccine manufacturers. And Vallance worked for years for GSK – one of the dirtiest drug companies in the world in my view. Indeed, the last time I looked, Vallance still had a lorry load of shares in that drug company.

How could either of them defend their decisions with that sort of background?

Their refusal to debate, and the refusal of government ministers and other advisors, to debate their decisions in public is one of the foremost reasons why we know that everything about covid-19 is fraudulent. If they had truth on their side they would be happy to debate because they’d know they’d win.

The other big reason we know this is all a fraud is the fact that governments everywhere are telling lies about those of us who are speaking out. I’ve been lied about everywhere on the internet since the day after my first video. And those lies and libels originated with governments which now control major web propaganda forces such as Google and Wikipedia.

But now, for the first time, the pro-covid fraudsters may be about to make a mistake.

Decades ago the GMC was best known for striking off the register naughty doctors who had relationships with their patients. The Sunday papers used to keep several pages clear for whenever the GMC held a meeting.

But gradually the GMC has, like so many charities and quangos, changed into a money making machine. Over recent years the GMC’s army of overpaid bureaucrats have in my view been responsible for thousands of deaths. The GMC has become a form filling nightmare and has forced many doctors out of practice and into early retirement. As a result the GMC has, I believe, done infinitely more harm than even the most wicked or incompetent medical practitioners. In my view it’s the GMC which is partly responsible for the fact that for years now many patients have concluded it would probably be easier to win the lottery than get an appointment with a GP.

But now, it is the GMC itself which could find itself on trial.

And this could give us an excellent chance to prove that everything the establishment has done since March 2020 has been built on lies.

A little while ago a British doctor called Dr Sam White, practising as a GP in England, had the courage to speak out about the dangers of the covid-19 experimental jab and advised people not to wear masks.

This, of course, is considered medical heresy these days.

Any doctor who dares to reveal the truth about the covid-19 injections or about the dangers of mask wearing is likely to be attacked in every way possible.

The GMC is now contemplating action against Dr White – who has already been suspended by NHS England.

Well, you can’t describe it as a crime.

Because as far as I can see all he has done is have the courage to protect his patients, and to speak out to protect members of the public, by practising fact based medicine.

Getting into trouble for the crime of telling the truth has always been a sign of living under an oppressive, totalitarian regime.

If the GMC now decides to try to remove Dr White’s licence completely, thereby preventing him from earning a living as a doctor and practising his profession in any way he chooses, then it will have to explain why – and in explaining why it will have to prove that what he has been saying is not true.

The evidence against the establishment line is absolutely overwhelming.

Here are some of the facts the GMC will have to face if it decides to go ahead.

Second, the statistics show that the number of people who have died of covid-19 is no greater than the number of people who die in a fairly normal year of the flu. The Government has fiddled the figures by telling doctors to list deaths as covid deaths if they occur within weeks of having a positive covid test. This means that people dying of cancer, heart disease and so on have all been listed as having died of covid-19. If someone who was run over by a bus had tested positive before their accident then they officially died of covid-19. Even so, the bald statistics show quite clearly that covid-19 killed nowhere near as many people as is claimed. Indeed, it has killed no more than the flu. There never was a pandemic. If the GMC wants to avoid a very embarrassing confrontation with the facts then it should study the transcript of my video entitled Final, Irrefutable Proof that the Covid-19 Pandemic Never Existed. The transcript is on this website.

Third, the PCR test so widely used as an alleged indication that we are in the middle of a pandemic, is as reliable as a politician’s promise.

Fourth, the scientific evidence proving that masks do not work – and do far more harm than good – is incontrovertible. My book Proof that Masks do more Harm than Good is available free as a PDF on this website.

I heartily recommend that the GMC download the book and look through it. If they persist in trying to defend the use of masks they will look very silly.

Fifth, the experimental jab. Well, the evidence proving that the experimental jab is causing thousands of deaths and hundreds of thousands of serious injuries is available for everyone to see. I’ve done numerous videos listing the facts and anyone in doubt merely has to go to my website and look at the article entitled UPDATED – How many people are the vaccines killing.

Both the US and British Governments publish figures which show just how dangerous the experimental jab is proving to be. Tragically, we knew it was going to kill huge numbers of people before the jabbing programme started, but a corrupt government, a corrupt medical profession and a corrupt mainstream media have successfully hidden the truth.

The problem the GMC will have, if it goes ahead, is that the Government position on masks and the covid-19 experimental jab is based entirely on lies, myths and hysterical warnings which were designed to create fear and panic rather than to protect our communities.

And if the GMC decides to try to take away Dr Sam White’s licence then it will have to defend those feeble lies against a battalion of truths. The GMC will be making the biggest mistake in its history if it continues with this case. But it will, at the same time, give us a real opportunity to attack the lies and prove, quite conclusively, that the covid-19 experimental jab should be banned and that masks do more harm than good.

Either way the GMC is going to lose this battle.

If they back off, and don’t try to take away Dr Sam White’s licence, then they will be admitting that the Government and the medical establishment have put forward claims which are indefensible. The fraud will be over.

And if they insist on trying to remove Dr Sam White’s licence then, if they rely on the facts and the science, they will lose.

And everyone will know that the covid-19 fraud is just that – the biggest fraud in history.

Please send this to everyone you know – and to the General Medical Council.

Vernon Coleman’s latest book Covid 19: the Fraud Continues contains the transcripts of all his videos in the second half of 2020 and is available free of charge as a PDF on this website.

Share:
Share on TwitterShare on FacebookPrintEmail
Recommended:
Here is the PROOF that covid-19 was downgraded in March 2020
UPDATED: How Many People Are the Vaccines Killing?
Covid-19: The Greatest Hoax in History
The Wake-up Video - Uncensored Premiere
Short Message from Dr Vernon Coleman 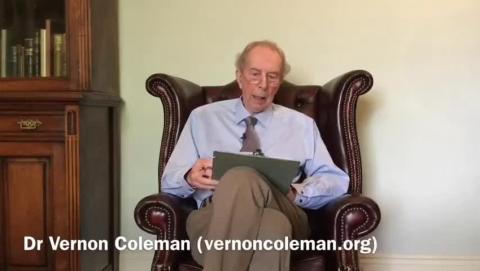