Apartheid, Ghetto or Enslavement - Your Choice

We live on the edge of a cliff, and from the end of our garden we have a view of the beach below. We can tell, at a glance, if the tide is in or out and, therefore, if it is possible to walk along the sand to the nearest village.

After popping to the local shop, I was stopped by a man who was fiddling with one of those smart mobile phones which provide internet access, a camera and the usual assortment of gadgets provided by the modern equivalent of a Swiss Army penknife.

He, and his female companion were standing at the top of a path leading down to the beach. You can’t tell from the top of the path if the tide is in or out.

‘Give me a minute and I’ll tell you,’ I promised.

I ran up through our garden and reached a point where I could look down on the beach. Then I ran back down to where the man was waiting.

The man and the woman both thanked me and then he returned his attention to his mobile phone. `I’ll just check that with Google,’ he told me, pressing a few more buttons and tilting the screen to avoid the sun.

Slightly surprised by this, I made some anodyne remark about the miracle of technology and wandered homewards, wondering as I did so, if he would have checked with Google if he’d been able to view the beach himself. I rather suspect he would have.

When I looked back a minute or two later, he and his companion were still bent over the tiny screen, determined to obtain Mr Google’s opinion on the state of the tide.

And so, it seems, the world has become dependent upon technology to the exclusion of everything else. It is, perhaps, the very first tentative step towards the trans-humanism dreamt of by the proponents of the Great Reset.

And this matters because we are living in a country every bit as repressive and restrictive as the Russia of Stalin or the China of Mao Zedong. Governments are in the process of making a refusal to take an experimental injection as big a crime as not joining the right political party as it was in China. Everything they say is a lie. Everyone who opposes them is mad, bad and dangerous to know.

Members of the new race of humans, a sub-species perhaps, are already pretty much completely dependent on their electronic gadgets and their Apps. They are reliant upon distant sources of inhuman, programmed information and guidance.

Millions allow software to decide how they save, invest and spend their money. And even if they consult professional financial advisors the advice they obtain comes second-hand from `professional’ software. As far as the consumer is concerned the human element is so slender as to be almost invisible.

Medical care is managed by computers too, with software guiding doctors as they make diagnoses and plan treatment programmes. And if surgery is required then the knife may now be guided by a pre-programmed robot. We are advised that diagnoses made by computers are more reliable than diagnoses made by humans and that surgery planned and performed by computer controlled robots is safer and more efficient than the traditional kind.

On the roads we are encouraged to put our lives in the `hands’ of software designed for self-driving motor cars. Even when we think we have some control over the vehicle in which we sit the computer may decide when to switch on the lights and the windscreen wipers and even press the brake for us when it deems such action appropriate. The computer will tell us if we stray from our allotted lane and control and record our decisions for authority to examine. The computer’s allegiance is always to authority; it is dedicated to treachery.

In the skies we sit in aeroplanes which can take off, fly and land with little or no human interference.

And at home our daily activities are managed by the internet of things. Our television sets listen to our human conversations and report what they hear to higher authority. Refrigerators can order our food for us, making sure that only approved items are selected.

All this has happened within a single generation and we are, without question or suspicion, handing over control of our decisions and our behaviour at a speed which I find quite terrifying.

Computers also control our governments and their vital ministries. The events which dominated every aspect of life in 2020 and 2021, and which seems destined to control lives around the globe for years to come, were the result of computer modelling. Mathematicians with virtually no medical knowledge or practical experience, and with track records notable only for their apparently appalling incompetence, made fundamental decisions which resulted in millions of deaths and the virtual destruction of the global economy.

The fundamental problem, of course, is that all this software, all these computer programmes, make decisions which depend entirely upon the information with which they are fed.

The App which tells you where to invest your savings and how to make best use of your pension makes decisions according to the information with which they have been fed by human operators. Diagnostic computers are only as good as the basic information with which they have been supplied. The individuals who have created the algorithms have all the power.

Government policy is now made not by politicians, or even by their advisors, qualified or otherwise, but by computer operators and mathematicians who are, of course, themselves totally reliant on their own sources of information. It’s a pretty obvious thing to say but when you consult a computer the information you get out of is, even if accompanied by advice, only as good as the information which was fed into it. It is for this reason that egregious errors are frequently made. And, of course, sources of information which appear reliable and authoritative may, like Wikipedia, be controlled by people who have vested interests to defend and promote.

And, it is for the same reason, that many apparent errors are not errors at all but are decisions deliberately designed to further the aims of individuals whose objective is not to serve the public but to control it.

The promised value of trans-humanism is an easily sold myth. The idea that we can all become an improved version of the six million dollar man is an easy concept to sell. Jason Bourne with enhanced mental and physical prowess is not a hard sell to those who want to be more than they are – but without the once inevitable effort.

But the reality of trans-humanism is not quite what it seems to be and yet, despite that, it is a myth that is getting ever closer, approaching us at such a speed that most people still have no idea what is happening to them, to their lives or the world around them or what is going to happen to them next.

The result is, of course, that we are moving inexorably towards the future they have planned for us and we are expected to rely upon the goodwill and honest aims of those who are intent on controlling our lives and our future.

We are heading towards a choice none of us thought we’d ever have to make: it is, indeed, a choice we’d never have imagined could or would exist.

The Great Reset being promoted in the west is the equivalent of the Cultural Revolution which took place, and is still taking place, in China.

The ever-changing rules are designed to cause chaos, panic, confusion and despair. Nothing happens by accident. The plan is to force us into one of three groups: those living under an apartheid regime, those living in a ghetto and those who are living in enslavement. And you’re going to have to choose soon because it’s later, much later, than you think.

It isn’t difficult to work out what the three groups are going to be. You will have to choose the group of which you want to be a member.

First, there is enslavement.

Joining this group is very easy. You just have to do exactly as you are told. Make sure that you are connected to all the available Apps so that you can be pinged if you seem to have been in contact with anyone who has tested positive for covid-19. Make sure that you have all the jabs you are invited to have and you will receive a `vaccine passport’ which will enable you to travel abroad (with some restrictions) and to enter entertainment and sporting venues. You may even be excused from self-isolation and lockdowns. At the moment, most governments are recommending two jabs of the covid-19 concoction but within a month or two the requirement will rise to three or four jabs a year – maybe more. I’ve always suspected they’d want the jabs to be monthly.

Those who decide to abandon their traditional individual rights will be expected to enter the digital world completely. They will subscribe to smart phone applications which will ensure that all their financial and medical information is stored centrally. All their bills (including tax bills and utilities) will be paid automatically, with payments taken out of their online bank account. Their financial and medical records will be accessible to everyone associated with the State (including banks, employers, utility companies, police, major retailers and so on).Cash will be a memory.

Those who choose the enslavement option will find their lives will be run largely by the State. They will be herded into smart cities and in return for surrendering all their independence they will be rewarded with full `membership’ of the new normal society.

Next, there are those who aren’t prepared to accept everything they’re told to do but who still want to live on the edges of the society they grew up in. These individuals will live in an apartheid world: they will live in the digital world but not be of it; they will be second-class citizens in every possible way. The trans-human creatures around them will have the privileges. Those in the apartheid world will exist; half in and half out of the digital society; excluded from the delights and entirely without privileges. Unvaccinated, unmasked they will survive without all the things we take for granted. They will, for the large part, be beggars, reliant on hand-outs from an elite which will have been trained to regard them as the enemy and who will have been wired to be without compassion.

And then there will be the ghettos – where the defiant will survive as best they can.

They won’t just be spiritual ghettos, as they perhaps are at the moment.

They will be physical ghettos, apart from the digital society.

Those in the physical ghettos will be forever in danger. They will, if they are lucky, be left apart, alone and unprotected. The residents of the ghettos will have to fend for themselves; providing themselves with food, shelter and primitive medical care.

But they will be the last free men and women; outside and away from the reach of the forces of evil.

Those are the choices we have to make now because time is running out fast. My choice? It’s the ghetto, of course.

The future is already on our doorstep.

And we will, of course, keep fighting.

There’s a line in the film Casablanca which is rather apt: `If we stop fighting our enemies, the world will die.’

Share:
Share on TwitterShare on FacebookPrintEmail
Recommended:
Here is the PROOF that covid-19 was downgraded in March 2020
UPDATED: How Many People Are the Vaccines Killing?
Covid-19: The Greatest Hoax in History
The Wake-up Video - Uncensored Premiere
It Will Soon be too Late - For the Children 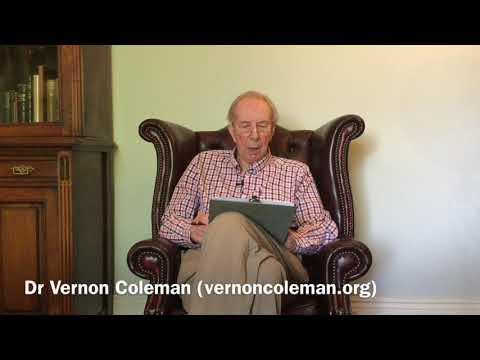